Thomas Mawson (1861-1933) was one of the most renowned and prolific Arts & Crafts garden designers of his era.

Brockhole’s gardens are a fine example of his early work and one of the few collaborations he had with architect Dan Gibson.

Mawson started his career as a local landscape gardener and is responsible for the design of many gardens in Cumbria, notably Rydal Hall, Holehird, Blackwell, Cragwood and Langdale Chase.

During his career he also designed gardens in numerous countries around the world - including the Peace Palace Gardens of the Hague - and contributed to city plans in Athens and many North American cities. Brockhole remains one of his important gardens - English Heritage has listed them as being of National Importance.

Mawson spent time at a Windermere nursery, gaining essential knowledge of the plants which would grow and thrive here. He was a teetotaller workaholic with a passion for detail and had firmly held opinions about garden design – overseeing every details of his gardens. He recorded examples of his work, together with his design philosophies, in his book, The Art and Craft of Garden Making.

The garden was built as a series of south and west facing terraces, sloping gently down to Windermere, moving from formal to informal planting through flowerbeds, meadow and woodland to the lakeshore.

A system of underground water tanks below the terrace by the Orangery collected rainwater from gutters to act as a Victorian ‘sprinkler system’ to irrigate the flower beds.

The terrace was created for the mountain view at the Northern end, towards the Langdales, Bowfell and Crinkle Crags. This immediate terrace adjacent to the house was designed to be restful, and available for promenading at all seasons. We have preserved many of Mawson’s original ideas and garden furnishings. The plantings, whilst still in keeping with Mawson’s ideals, have continued to evolve, and Brockhole is now home to numerous interesting and unusual plants from all over the world. The temperate climate at Brockhole allows for many tender plants to flourish alongside the shrub roses, herbaceous borders and the wildflower meadows. 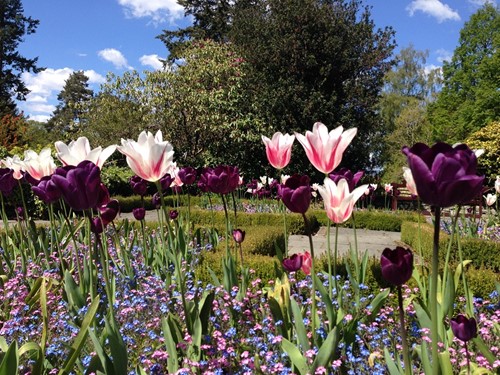 Mawson’s original plantings that remain include some fine specimen trees (conifers and broadleaves), formal clipped yew and box hedging, Rhododendrons, Wisteria and Magnolias. Added to these are a wealth of herbaceous plantings, scented plants, old-fashioned roses and various other ornamental trees and shrubs, designed to provide something of interest at all times of the year. 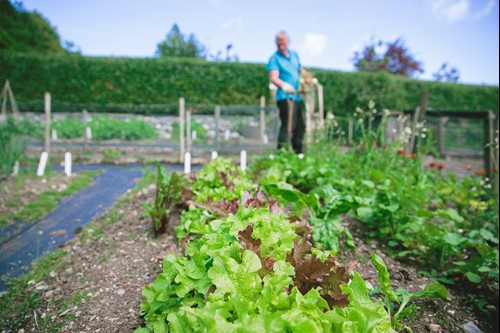 An important and integral piece of Mawson’s original design was the Kitchen Garden. Unusually for a productive garden, it was in the middle of the site and not walled, yet perfectly placed to aid good growing of fruit, vegetables and flowers. In 2019 Brockhole restored and re-opened one of the original kitchen gardens, with help from the Heritage Lottery fund, bringing Mawson’s garden back into production. Visitors can explore the Kitchen Garden and enjoy its produce in the Brockhole Café.

Brockhole is a garden for all seasons. You can always enjoy a seasonal walk in the small but perfectly formed ancient woodland. When the snowdrops and bluebells carpet the ground, when the autumn colours appear, or on crisp winter days this can be a very special part of your Brockhole visit. From the grounds you can access the shoreline - even enjoy a paddle. 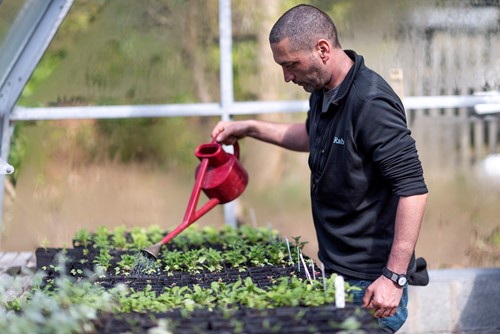 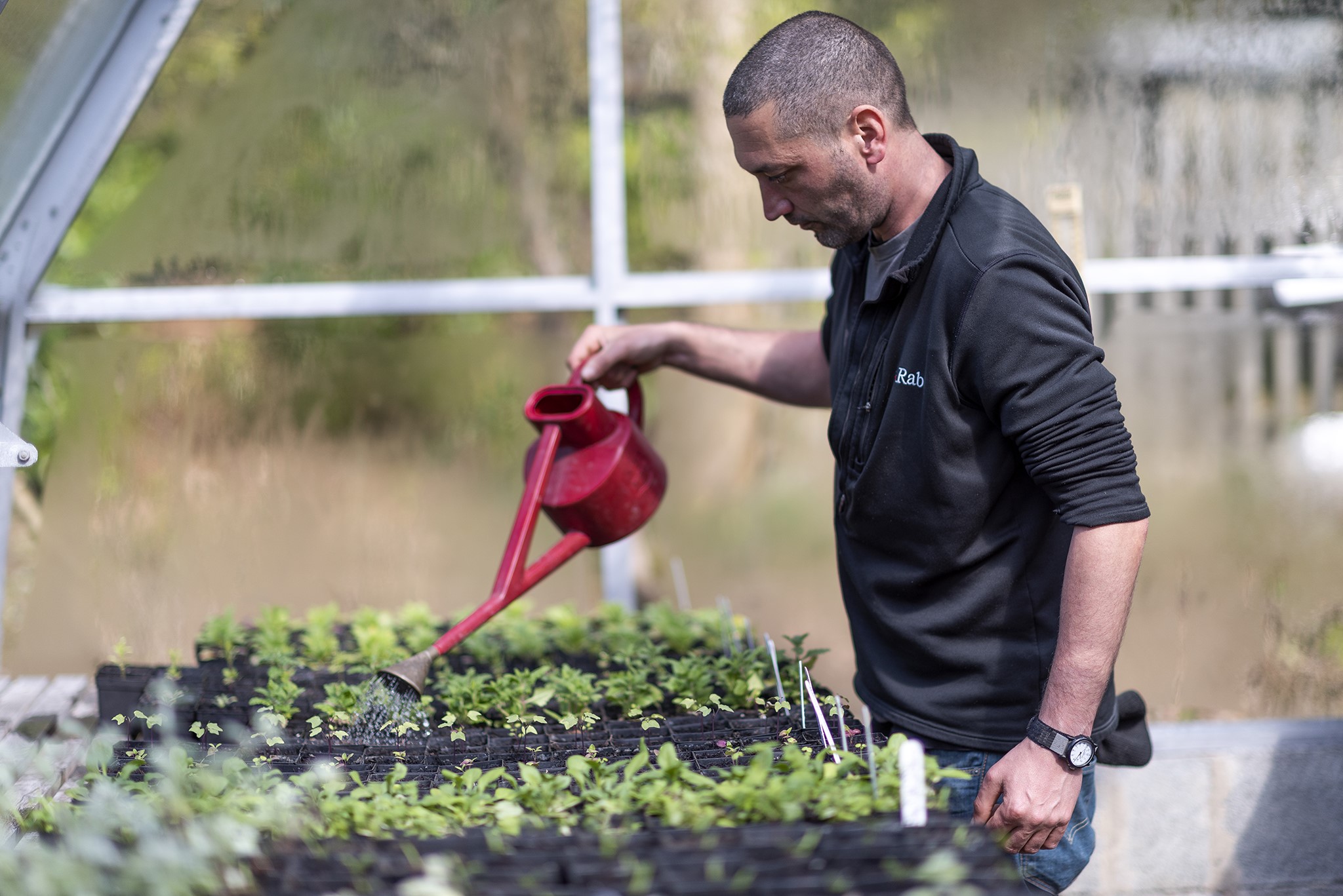 Take a look at some of our seasonal blog articles by our Head Gardener Iain Turnbull:

Highlights of the grounds

Mawson laid out this lawn when first landscaping the gardens, and the lawn was used for croquet and tennis.  This is where the family would most likely be joined by Mrs Gaddum’s famous cousin Beatrix Potter to play games in the summer.

Spectacular view of the Langdales 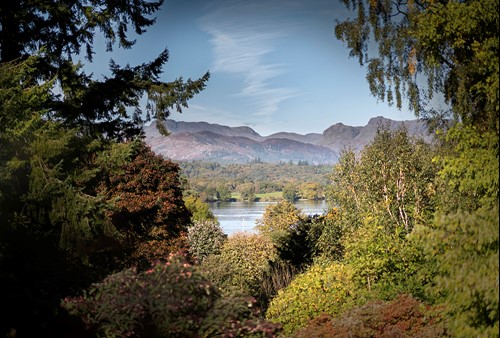 The terrace enjoys a beautiful view of the Langdale Pikes, Pike of Stickle and Harrison Stickle, two of the most well known Lake District mountains.

These hills were the site of a Stone Age axe factory. In 1947 this major ‘factory’ was discovered, with chisels and axes belonging to the farmers and craftsmen who lived in Lakeland 4-5,000 years ago. This Langdale ‘shop floor’ was 600 meters up in the hills, and during the summer axes were chipped out, and taken ‘home’ to the west coast of Cumbria during the winter months to be polished. These products were widely exported to the Isle of Man, Ireland and Southern Scotland. 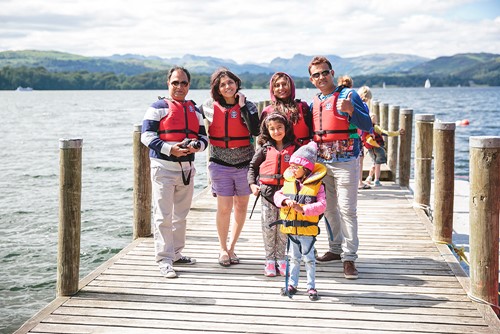 You can see a change in geology from this point. The Langdale hills and surrounding large mountains all represent the volcanic rock. Round to the left, near the lower, wooded hills of Claife Heights the geology is Silurian Slate. Slate breaks down more easily so here there is very fertile soil. These soils have been exploited by medieval farmers and the Cistercian Monks of Furness Abbey who had major estates including deer parks for four centuries.

The largest lake in the Lake District, Windermere is 10.5 miles long and 1.25 miles wide at its widest point. It is 219 feet deep. It is fed by the River Rothay and the River Brathay, and at the southern end, it is drained out by the River Leven at Backbarrow, which meets Morecambe Bay near Ulverston.

At the north end of the Lake is the small town of Ambleside. This was the site of a Roman Fort known as Galava. This was a small enclosed garrison on the way to the larger, better-known fort at Hardknott, heading for the West Coast at Ravenglass.

The early and middle ages in the central lake district were a wild and lawless time. There was scattered subsistence living with some ore mining. Gradually other industry developed, including slate industry, with gunpowder making at places such as Elterwater, in the Langdales. As these industries developed, they used Windermere as a transport system with sailboats and long ore boats.

A passenger service was introduced on Windermere in 1836. The first paddle steamer – The Lady of the Lake – was introduced in 1845. The tourist trade grew, especially in the second half of the 19th century when the railway arrived at Windermere.